After reading in a german rc magazine about the ardupilot mega 2.5 and its incredible possibilities, I was sure that someday I will have got this piece…

… and of course the day came and I was able to order it from lipoly.

Here is a pic directly after opening the box: 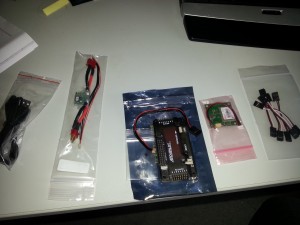 Being so curious to see how it’ll work, immediately after finishing work I uploaded the arduplane software. This way I wanted to check out the stabilization feature via the aileron servo. Here’s a little video showing this feature:

Explanation of the video:
The Ardupilot Mega (APM) is connected via USB to my notebook running the MissionPlanner software. The rc receiver is sends the transmitted signals through the APM to the aileron servo. First I’m using the remote control to steer the servo.
In the second part I pan an tilt the APM, which is stabilizing the „flight“ moving the aileron servo.