I knew that I wanted to build a multicopter and that the ardupilot mega 2.5 should be the platform for stabilization. At that point I did a lot of research work:

That qestion was quite easy. The project had to be cheap and simple, too.
So my first idea was the tricopter. It is cheaper than the other multicopters, because you only need 3 motors and 3 speed controllers instead of 4, 6 or even 8 each. But I thought, it would have been to complex for my first DIY project, because the motor has to be movable by a servo.

So, my decission was building a quadcopter. Only 4 motors and controllers, no moving parts except the props. This makes it an easy platform.

Which motors to use?

There are many different motors and even more opinions about choosing the right motor. As I said before, the quadcopter had to be cheap, that’s why I searched for a no name product, which was – nonetheless – powerful enough and had a good quality.

The local reseller suggested to use hacker motors or robbe’s roxies. But at a price at about 40 EUR each, those motors were out of reach. On the german shop Flyduino I finally found the right ones:
the Suppo 2212/ 13 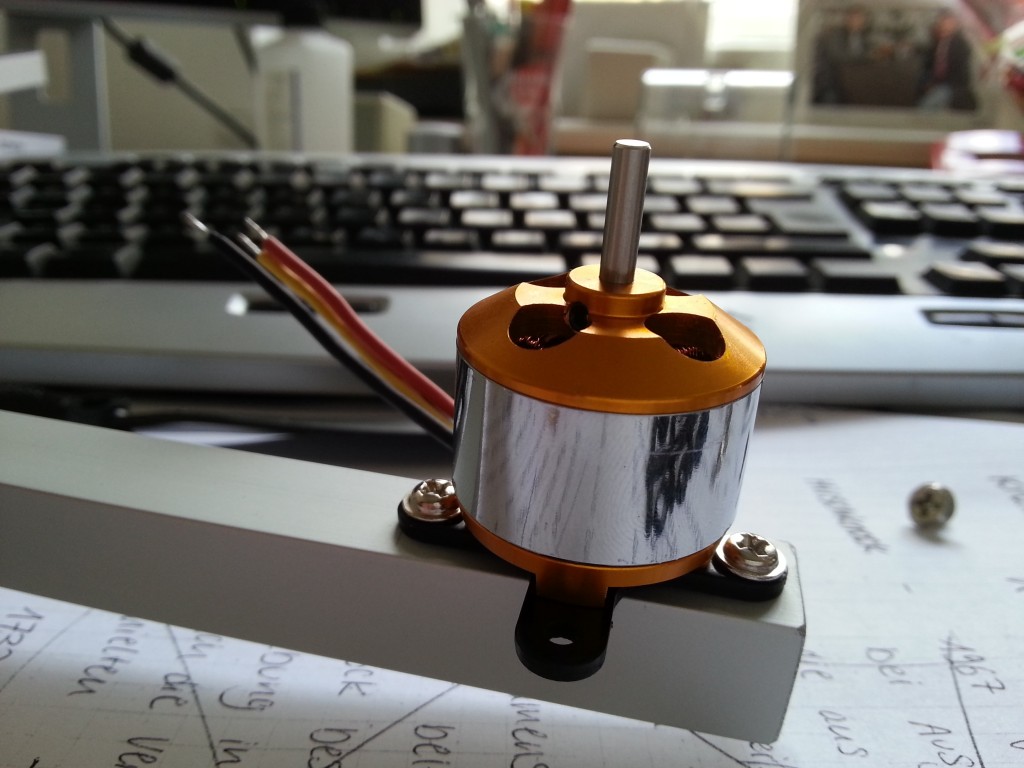 After reading this review about them on micropcopters.de and seeing this video I was sure, that I was right in choosing those brushless outrunners. (btw: thanks warthox for the great review and the stunning videos)

OK, it had to be a quadcopter and the suppos were the motors of choice. But what about the ESCs? Cheap of course, but I read much about the special requirements for mulitcopters. Let me say it in simple way: „normal“ ESCs are not that quick in accepting the signal from the controller board (APM 2.5). That’s why a guy called SimonK programmed a custom firmware for cheap ESCs, which can handle fast changes. Using this firmware imporves stability and responsiveness of the mulitcopter.

Knowing that, it had to be SimonK based ESCs. Normally, flashing firmware and other hardware hacking stuff is not a problem for me. But in this case I had to buy a special AVR programmer card which I didn’t want.
Fortunately Flyduino (the shop, which sells the suppo motors) had ESCs in stock pre-programmed with SimonK’s great piece of software.

So I my first decisions were made:

Here is the construction page.